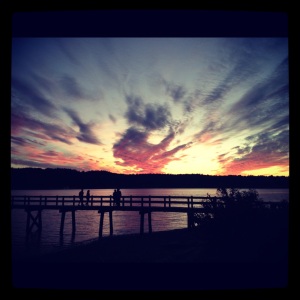 I dreamt of water again.

Friday afternoon I received the unbelievable news that one of my oldest friends died suddenly; a freak, bolt-of-lightning, one-in-a-million medical event tore her away from us, and in the process, ripped a hole in the universe.

The hours between 3:30 in the afternoon, when I received the call, and 12:30 a.m., when I collapsed in a hotel bed, felt numberless.

I awakened early with the fragmentary memory of floating on water. How did I get there? Slowly I followed bread-crumbs of crazy images backward as far as I could.

I was in the attic of a four-story ramshackle Victorian. Around me were strange but genial characters who resembled figures out of stories: a giant, an old man with a long beard, and a curly-headed individual who resembled Merry Brandybuck but initially seemed neither male nor female.

I was happy to see “Merry” in my dream. As I hugged her in reunion – by then this character was a she — it had the feeling of simultaneous greeting and farewell.

Then the house collapsed. It had been unstable to begin with, with floors no longer square above the other, the attic teetering on top, off balance. We had already taken note of a gash in the wooden floorboards, below which we could see sky.

The attic suddenly gave way, but rather than crashing to earth as we expected, the room transformed into an aircraft. A fuselage of patched boards took shape and the walls tore away, revealing long extensions on both sides: wings.

Immediately, the house-turned-plane dived downward, out of control. Though shocked, Merry and I weren’t afraid. I looked at Merry, smiling and sending a silent message that said, “I love you… I’m grateful you were in my life… we’ll be together again.”

Just before the moment of impact, our craft stabilized into a glide, inches above the water. We floated above a gently meandering river, safe. Then as we rounded a bend, tall trees on both sides sheared off the wings. Now, surely, we would die.

A plume sprayed up on both sides. Miraculously, our craft held. The convex hull buoyed us on the water. We were safe.

After Dad died, I hoped that I would be sent the kind of dream that comforted me after the death of my mother: a vision of her happy and whole, sitting at the kitchen table in her favorite pink satin bathrobe. Instead, I had water dreams. In the first, I heroically forded a cold river to rescue a boat that was to be used in a race. In the second, I returned home to find the ferryman Charon, replete with black swim cap, seated in my living room, waiting to help Dad cross over.

I dreamt of water again. This time, I got to say goodbye and tell her we would meet again.

Source of all blessings, you bless us with dreams-dreams while we sleep and dreams in our most wakeful moments. May I be responsive to both forms of dreams and pass these blessings on by living a life that is faithful to their guidance. — Brother David Steindl-Rast