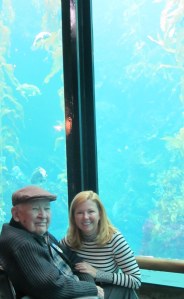 The Henry Chronicles started as a journal about life with my father, who survived WWII and Iwo Jima, three heart attacks, three open hearts and three strokes, as well as the loss of his young daughter in 1953 and then my mother in 1999. After a massive heart attack in 1962, when he was 46, he thought he might never be able to work again. The Marine Corps thought that, too. Its automatic retirement policy reflected the limited state of medical treatment in the 60s. But “The Colonel” couldn’t quit. He still had four children to put through college. No one, least of all me, would have predicted that he would live 50 years after that first heart attack.

After a few blog posts containing helpful tips for other caregivers, The Henry Chronicles quickly morphed into something unexpected. It became a celebration of the surprising beauty of old age and the joy I found being with him. As things got harder, it also became a place to share my painful struggle to come to grips with the impending end of his life, his and my search for faith and understanding, and my pleas for strength so that I might offer him the same unconditional love that he always gave me.

Now that he is gone, I realize that he left me with so much to think about. Though I am not grieving, I have no desire to just move on. The Henry Chronicles today is my pilgrimage to better understand the amazing journey of our seven years together, the one I’m still on.

Unless otherwise noted, all writing and photography published on this blog are copyrighted by Betsy C. Stone and belong solely to the author. They may not be reproduced in any form, fashion or medium without her express prior written consent.