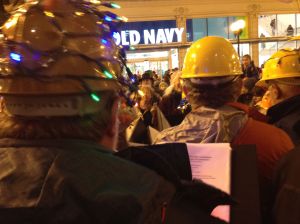 I started writing this post yesterday, and then I received an email from my brother Bruce about how he was brought up short when he reviewed his holiday card database and realized he would not be sending a card to Dad this year.

Little static-electricity jolts triggered by seemingly meaningless moments constantly zap you the first year after losing someone. Last year, addressing holiday cards was a necessary but unremarkable task. This year, it’s a reminder.

A year ago Friday night, December 6, I dined with two girlfriends friends in Seattle and strolled the Figgy Pudding outdoor caroling event snugly bundled up in matching winter white hats, mufflers and gloves. I felt full of holiday spirit, braced by the cold air, a little buzzed from the cocktails we shared over dinner. I never suspected that Dad’s decline had already begun.

My brother Scott, who was caring for Dad at my house, called the next morning to say that Dad was unable to urinate and in extreme pain. What should he do? At the doctor’s urging, he took Dad to urgent care where they removed over one liter of urine.

When I returned to Sacramento that afternoon, Dad was significantly weaker. He’d had a recent bout of extreme shortness of breath and then pulled a muscle. With the bladder problem, there was no question of him returning back to his assisted living community. By Tuesday, he was in extreme pain again, unable to urinate. He was sent home from the ER with a catheter that we hoped would come out after a week.

I was frantic. The catheter gave him a sensation that felt like urinary urgency, so he tried to rise every 15 minutes or so. If he was not watched at night, he would attempt to get up for the bathroom and fall.

Ten days later, he stopped being able to walk.

My world had transformed from light to dark. From an evening lit by sparkling decorations, cheeks blushing pink from the cold, lilting carols soaring in harmony, I sat by my father’s bedside, worrying.

Instead of making me sad, that turning point reminds me that a year ago, Dad was still here. A year ago, I had every reason to expect he would recover from this latest health setback. A year ago, I knew Dad would feel better when the winter lifted and spring bloomed again.

Today I leave Seattle, headed for home again. The house is already decorated. Dad’s room will be orderly and quiet. When I walk in the house, I will remember that it was the beginning of Dad’s final decline. The hard part is over. He is worth remembering, worth loving and worth every moment spent comforting him.