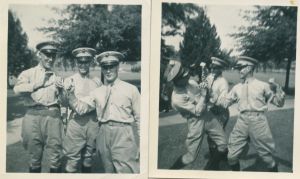 The first time a “Frost Call” landed in my inbox, I was startled. It turned out to be a death notice from a member of my father’s USMC 5th Reserve Officers Commissioning class — a group of 304 men who became second lieutenants just before the United States entered WWII. Talk about gallows humor, I thought when I looked back to the subject line.

I’d taken my father to a reunion of the the “Fighting Fifth” at the Marines Memorial Club in San Francisco. One of his classmates, I soon figured out, had taken on the role of communicator and regularly sent out “the poop” on gatherings and classmates. I added myself to the email list.

“Frost Calls,” which came with increasing frequency, heralded the passing of another classmate. I debated whether I should tell my father. What’s it like when the only news of old friends is of their death? When they are dropping like flies? In the end, I printed out the emails and gave them to him at the breakfast table. Some were — had been — good friends. He’d say something short like, “Good man.” Then he was quiet. I couldn’t tell if he was remembering his friend, Quantico, wondering when he might die, or refocused on the day’s paper.

Once a year, two lists were mailed out: the long list of Fifth R.O.C. members who were deceased, and the short list of those who were hanging on.

On New Year’s Dad, 2013, Dad’s classmate sent out an email with the subject “Geezers.” He announced that five classmates were 96 years old. I wrote back, asking how he was doing. He responded:

I’m doing OK, hard to get out of chairs, it’s now 14 years of living alone in a big house with pool to tend to, but no complaints.  I purchased a walker with a seat in it, works fine.  I can walk with it because it is something to hold on to, like a grocery cart. So walk with it about a mile every day without difficulty.  Knees bad, have to push with both arms to get out of chairs, and resist all stooping over to pick up things.  Result:  Clutter, but still enough room to get over it, or around it. Driving OK, with license renewal due when I’m 100 in Aug 2016.

Since then, I’ve tried several times to reach Dad’s classmate. I’ve emailed and snail mailed. According to Google, he signed up for a youtube channel seven months ago. No death notice. I sent him a friend request on Facebook. He hasn’t responded.

I went back to the last list of living officers, dated 9 December 2011. As best I can tell from online search, 17 more classmates have died. Funeral notices usually show up high on the list of search results.

Robert A. Campbell, Henry S. Campbell and J.P. Campbell on graduation day: the caption for the photo at left reads, “A la Pall Mall (cigarette) ads” 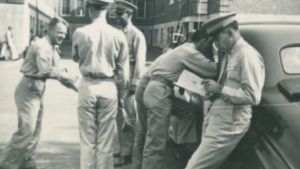 Members of the USMC 5th R.O.C. The caption reads, “between classes.” Henry S. Campbell leaning against the car.

3 responses to “The Last Frost Call?”