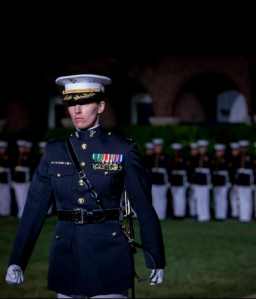 Not familiar with “ooh-rah”? It’s that explosive sound that Marines use to express enthusiastic approval. I heard it at Friday’s evening parade at Marine Barracks in Washington DC and I’ve been thinking about it ever since.

Among the precision marchers on the parade ground and ceremonial hosters were a few women in uniforms identical to their male counterparts. And they looked sharp.

I was saddened, then, when I saw the trolls out on Marine Barracks’ Facebook page commenting on the photo that appears up top:

Thank God I got out of the corps before I witnessed this political crap take place!

It seems that several of the Barracks’ Facebook followers were dismayed to learn that women had invaded the Corps, and in this case, were wearing the male uniform.

A woman Facebooker responded far more courteously than I might have (but knowing online trolls, I like to stay out of their line of fire):

Gentlemen, it’s the prescribed parade uniform for designated personnel at the Barracks. Pls keep your personal attacks/feelings against this Marine to yourselves.

I look at it like this. I dont care which uniform of the Marines she is wearing. She a Major and by the looks of it, has had a pretty good career. Semper Fi Major!

I prefer that she wear this one as she carriers herself, the Ladies of the Corps and the Marine Corps well. Semper Fi

I had the honor and pleasure of meeting the Marine they were writing about. And she’s not just any Marine. Major Sarah Armstrong is the first female parade commander of a Friday Evening Parade, a tradition that started back in my Dad’s time as Executive Officer of Marine Barracks.

Those shiny medals on her jacket? They’re campaign and achievement medals. She earned ’em the hard way. At least one of those ribbons denotes her tour in Afghanistan.

In the place where my father served 56 years ago, at a time when only men achieved positions of leadership in the Marine Corps, I’m thrilled to see Major Armstrong doing her thing, and doing it so competently.

As one of the Facebookers concluded:

Per the comment I received from my second cousin John, turns out I’ve got a strong woman in my extended family in the form of Col. Marne Sutten, US Army. She’s married to John’s son, Col. Grant Fawcett. Between the two of them they served five tours in Iraq. They’re busy raising their two children in Tampa, FL. Photos provided by John Fawcett:

Col. Grant Fawcett as the last convoys pull out of Iraq