Seeing Mom Among the Flowers 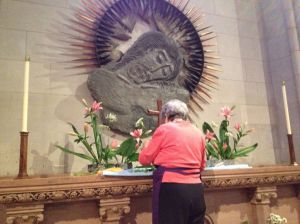 Friday was my “Mother’s Day.” Mom, gone since 1999, felt so present to me all day. I came east to see my friend Sharon and the premiere of the documentary she produced about the author Elizabeth Spencer, “Landscapes of the Heart,” but also for a mission: I hoped to secure a date for my father’s and mother’s interments at Arlington National Cemetery.

Though it was Dad who I focused on during the past seven years, and Dad who died in January, the trip was about both of them.

After meeting with a representative at Arlington, I asked Sharon if she would mind visiting Washington National Cathedral. My mother always talked about it, and continued to buy the Cathedral’s annual Christmas cards long after we left Washington, D.C.

Upon entering the Gothic-inspired masterpiece, we walked up the center aisle and diverted to the right around a stage that was being prepared for a concert.

Like many European cathedrals, the nave and transept are embellished with small side chapels.

In the first of these chapels, below a round contemporary sculpture of Jesus’ face, stood a woman in a pink shirt and apron, stoop shouldered, slowly trimming the stems of lacy blossoms that she was using to complete the final touches on two symmetrical arrangements of pink lilies. Her salt-and-pepper hair was short, mostly gray, a little curly. Perhaps the last vestiges of a perm that was nearly grown out.

For just a moment, she was my mother.

The woman in pink was an Altar Guild member, one of the stalwart legions of the Episcopal Church Women who do so much behind the scenes in fulfillment of their faith and commitment to the church, in camaraderie with one another.

My mind involuntarily summoned the smell of damp linens, starch and heat, a visceral memory of one of my mother’s monthly turns ironing the altar linens. Just as readily, I remember the scent of fresh-cut stems when she trimmed a gladiola, a rose, a peony, or greens harvested from our back yard for an altar arrangement.

In the sculpture above the altar, Jesus’ eyes are closed, but his head inclines toward her. I don’t know if the image is meant to represent him in death on the cross, or is meant to express sympathy for those who pray here. Blade-like rays extend beyond his halo through which a jagged hole is blown.

Later I learned the chapel memorialized those who served and died in wars. Near it, a bronze statue of the Christ Child welcomes visitors to the adjacent the Children’s Chapel. The statue is the size of a six year old, its palms polished to a sheen from all of the touches to its outstretched chubby palms.

It felt meant, just as the whole week has felt perfect. Here is “Mom,” creating a striking decoration for the War Memorial, within the hour that we have confirmed a date and time for her burial along with Dad, joining Midge in her resting place. And there, next door, is the Children’s Chapel, with the child Jesus extending his arms in welcome.

My brother Scott sent this reply to a note I sent to my brothers confirming the interment date. “Has anyone thought about what day it is today? Nice that we got this confirmation on the 14th anniversary of Mom’s passing.”