I had forgotten, but my left hip remembered. My husband and I were in Costco, wondering if they carried mattresses in-store (they don’t) when I picked up a ream of paper. I feel badly about all of the trees I have killed, writing, but not bad enough to stop printing. Something about black words on a white page proves that I have accomplished something that day, and not just humored myself.

I shifted the ream — twenty-four pounds of extra-white premium multipurpose paper — to my left hip. Feeling its heft, I hugged it there, filling a space I hadn’t known was empty.

Had it been my toddler son or daughter, their warm bottoms would have straddled my hip, cushioned, perhaps, by a diaper. They would relax against me, legs dangling, rubber-toed tennies syncopating against my thighs as we walked. If I leaned too far for comfort, they would clutch my shirt, but without much anxiety. I would never drop them.

At some point during my father’s elder years, he began to hold my hand. Early on, I recognized the gesture as one that used to pass between my mother and father. When I used to observe them from the back seat, I saw how he reached toward her, how she slipped her fingers into the hollow of his palm, how they fit together. They stayed like that until she sensed that he might need both hands for a complicated maneuver like merging onto the freeway. Afterwards, they linked again.

The first time that my father took my hand in the car, I could tell that it comforted him, but it discomfited me. Hand-holding (and back-scratching and foot-rubbing and pat-pat-patting, always three pats on the thigh) was something reserved for the two of them. He wasn’t confused — I was still Betz and he was still Dad — but for a long time, his touch felt awkward.

Now I understand. There was a hollow space that was not empty.

My waist lacks the curve it once had — I’m more straight-up-and-down than hourglass now — so there’s nothing in the mirror to remind me of my children’s favorite perch. I love my adult children as much as I loved those little hitch-hikers, but, as dry as that ream of paper was, it watered something in me, and the memories swelled and became whole. 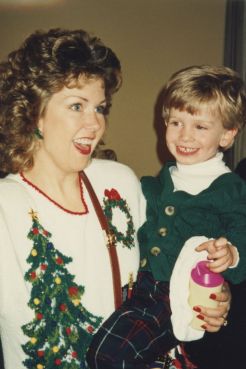 One response to “The Crescent Hip”