Atoms of the Soul 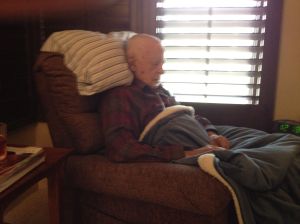 I dug this little piece out for a friend who is beginning a writing project. Pick an image, I told her. This is one of the first bits I wrote almost year ago with that same prompt. For some reason, the piece ended up on the cutting room floor. Maybe I’ll bring it back:

My husband says it barely qualifies as a pillow. It’s a suggestion, a flattened wisp. If I fluff it out and smooth it with my palm, it rises above the bed less than three inches. Strange when I see it that way. It almost looks normal, a utilitarian object that happens to be enclosed in a mismatched bed linen. Its wonder is its malleability. It can be curled into a ball, or laid softly across my chest like a cat.

I wonder if it began its pillow-life full of stuffing and somehow, as it was carried from one bed to the next, it lost a feather here, a feather there. If its diminishment fell beneath notice.

This is the pillow that cradled my father’s head when he died. I remember it from my mother and father’s house in Tacoma. I remember it – or one just like it – on my mother’s bed when she died. If it is the same pillow, I imagine it was encased, then, in a cover with yellow roses. My mother loved yellow. The pillow followed my father to his assisted living apartment in Seattle, then to my house. He tucked tissues under it each night. By morning, he had compacted it into a tight roll. Toward the end, when he was half-conscious in his recliner, I lifted his head and molded it around his neck.

I cannot let go of the pillow. A superstitious person might feel it is bad luck to keep something that came into such direct contact with death, that in those sloughed off skin cells, now reduced to dust, atoms of the soul remain. When I clutch it to my chest, I cradle the little bit of my father that remains.