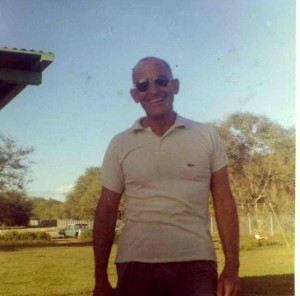 “Do you remember riding on my shoulders in the surf off Barber’s Point?”

I wanted to remember that father, handsome and fit at 46, but I had to tell my father I didn’t. I could see the memory in his eyes: the hot sun, the warm water, the feel of his little girl’s smooth legs, wet like a seal, on his shoulders; her fear, overridden by the knowledge that she was safe, which converted it into a frisson of excitement.

All I could remember, for a long while, was the sleeping man in the recliner — eyes closed, mouth open, white hair swept forward, belly distended from fluid, feet and legs twitching like a dreaming dog’s.  The man with the gravelly voice often mistaken for gruff.

Sometimes I imagine my father as a Russian doll — patient teacher within dogged salaryman within rugged outdoorsman within devoted caregiver within sleeping ancient— until finally I can see the curly brown-haired boy with the chubby knees and then the infant in his mother’s arms.

This is the memory of my father I would like to have from that day on Barber’s Point: the feel of his shoulders inside my embrace, the tickle of his chest hair as it rises and falls, the sensation of floating together.