A Holiday Letter Straight Out of the 90s 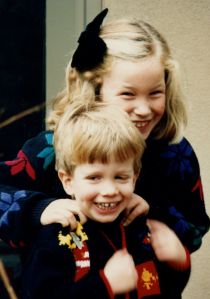 I’m dusting off my old holiday letters and pulling them together as a collection. Here’s a throwback — my holiday letter from twenty years ago (slightly excerpted).

The Saga of the Stones commences with “Deep Thoughts” triggered by the occasion of the seeding soccer tournaments. For those of you not familiar with this annual event, it’s the interminably long day at which soccer teams of all ages play one another to determine their opponents for the year. The day seems “interminable” due to the notable (and rather cruel) lack of unlocked bathrooms at the soccer field, and the constant delays while waiting for the “Iron Pixies” (that’s Maddie’s team, taking on a tougher demeanor this year with the addition of the ‘iron’ to the team name) to play the “Ponderous Pandas” and the like.

As I wait, it occurs to me that nothing as prepared me for many of the experiences of parenthood. I read the American College of OB/GYN’s pregnancy and parenting handbook. I did field research by talking to other parents with kids. I read What to Expect When You’re Expecting (which is to today’s parents what Chairman Mao’s Little Red Book was to the Communist Chinese).

What I need is What to Expect After You’re Expectant: the 90s Guide to Activities, Sports and School Fundraising. This book would reveal the mysteries of “Daisy” scouts, which is pre-Brownies, which is pre-Girl Scouts. (I suppose “Seedlings” are the next logical step in Girl Scout preparatory organizations.) It would warn a parent of the hazards of over-zealous troop leaders who send out detailed instructions for the in-the-backyard-campouts including (my favorite): “Be sure to WD-40 your daughter’s sleeping bag zipper.” Same leader develops a menu that includes solar cooking of solar jam (roughly the consistency of melted red plastic) and solar cooking of corn in a black Merlino wool sock (available for purchase at the shee-shee men’s store for $16 or you can do like I did, pull one from the drawer and hope the washing machine sterilizes). Or over-zealous Brownie mothers who call with the helpful suggestion that free-range chicken eggs are more flavorful than regular chicken eggs, and can be purchased at Trader Joe’s. Don’t jump to the conclusion that these people are rich. They’re not. They’re just trying to create a REALLY meaningful learning experience. Maddie’s enjoying it. It’s me who’s unprepared.

The same book would warn parents that teachers are NOT KIDDING when they announce a jog-a-thon to kindergartners and provide information on how to compete for valuable prizes. Last year I was certain they MUST know kindergartners don’t have powerful rolodexes (yet), and that it’s the parents who do most of it… at least until the kids perfect their direct mail strategy in first or second grade. Wrong. Maddie was half-crazed the second day of last year’s contest after one child won MAJOR PRIZES (requiring more than 20 sponsorships). This year Maddie was ready. Perhaps you received her inaugural direct mail solicitation.

I am definitely not prepared. (And the thing is, about the time I figure out the bends and twists of parenting a school-age child, and get Tommy into that phase, I’ll be switching from books like What to Expect… to The Fountain of Age and emblazoning bumper stickers on my car like, “Women don’t have hot flashes. They have power surges.”)

Meanwhile, Tommy is proving that there ARE some things that can’t be explained by environment and socialization alone. Tommy has been able to hurl balls accurately since he could grasp. (About half of Maddie’s tosses still go straight up and land somewhere in the vicinity.) Anything remotely round or cylindrical must be a ball. A personal favorite of his is hurling all of my tampons off of our two story staircase one-by-one. (I won’t send this letter to my Mom; she is still appalled that they have feminine hygiene ads on TV.) Tommy looks almost uncomfortably like Todd’s brother Michael – strawberry blond hair, big dimples and smile, mischievous personality. In our household, we eat over a dozen bananas per week (also two dozen apples and about three gallons of milk). Uncle Mike hates bananas. And Tommy won’t touch them. Given Mike’s high school antics, I’ve decided genetics can be scary. I hope they finish the human genome project before Tom hits his teens. Maybe something can be done.

Maddie has learned to read, knows the days and weeks and months of the year, can add and subtract, and aspires to be a “horseback rider and ballerina.” A major highlight of the year was a fishing-intro trip to the headwaters of the Metolius River in Oregon… Tommy is running (all the time), very social, and beginning to talk… We acquired fish, Thomassina the cat has stopped peeing on the downstairs bed, and Winnie the sheepdog is really starting to act her age.

One response to “A Holiday Letter Straight Out of the 90s”