When the USMC Faced Extinction 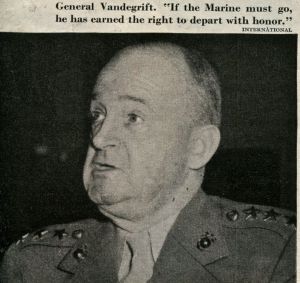 The USMC Commandant testified to Congress against marginalizing the Marines

I could have titled this post, “Dad’s Other War.” Though my father shared anecdotes about some of the back room haggling that went on during discussions about potential unification of the Armed Forces, I had no inkling of the depth of those discussions. During two assignments at Marine Corps Headquarters – the first in 1946 and the second in 1959 – he was in the thick of it.

Then I came across an article Dad had clipped and saved, “The Marine Corps Fights for Its Life,” by Richard Tregaskis, published in the Saturday Evening Post. Tregaskis was one of the first embedded journalists, and his book about the first 45 days on the island of Guadalcanal with the 1st Marine Division ranked on the New York Times bestseller list and was made into a movie.

The article began, “Why are the Army and the Air Force trying to humiliate the Marines by reducing this proud outfit to the status of a police force?”

As sensationalistic as the lede was, it was not hyperbole. Tregaskis reported that the Joint Chiefs of Staff were meeting secretly to consider papers that were later made public when introduced at a House-committee hearing.

The article published this excerpt from a memorandum to the Chiefs of Staff by Gen. Eisenhower (US Army):

The following is proposed for consideration…. (1) That the Marine Corps is maintained solely as an adjunct of the Fleet and participates only in minor shore combat operations in which the Navy alone is interested. (2) That the land aspect of major amphibious operations in the future will be undertaken by the Army, and consequently the Marine Corps will not be appreciably expanded in time of war. (3) That it will be agreed the Navy will not develop a land army or a so-called amphibious army. Marine Corps units to be limited in size to the equivalent of a regiment, and the total size of the Marine Corps therefore limited to some 50,000 or 60,000 men.”

Tregaskis also included an endorsement of Ike’s proposal by Gen. Carl Spaatz, who added that the Marines should be “lightly armed” with its roles and missions only “to protect United States interests ashore in foreign countries and to provide interior guard of naval ships and naval shore establishments.”

In other words, naval police.

The Marine Commandant, Gen. Alexander “Sunny Jim” Vandergrift, asked Congress to save the Corps and pointed out that the Marines have been engaged in nearly every battle since the nation’s founding. He counterattacked with this statement:

“The bended knee is not a tradition of our Corps. If the Marine as a fighting man has not made a case for himself, he must go. But I think you will agree with me that he has earned the right to depart with dignity and honor, not by subjection to the status of uselessness and servility planned for him by the War Department.”

The Senate and House passed two different unification bills. According to Tregaskis, the House bill guaranteed roles and missions for the Marines and Naval aviation, while the Senate bill did not. When the bills went to a joint conference committee, the consensus was ultimately to preserve the Marines’ role. An unnamed Marine officer was quoted as commenting, “Few Marine officers will ever realize how close the Marine Corps had been to virtual extinction.”

When I interviewed Dad about some of his memories in 2000, he shared this story about a proposal to unify the forces:

I’d been in grad school at Ohio State in personnel administration and training.  I’d been assigned to the Military Occupational Project.   The joint staff at the end of WWII recognized there are people with very highly placed skills who end up being misplaced during the war.  They needed more information about what jobs require people with high level skills and who the people are with those skills.

“They had 300 people working on it, led by Col. Dunn.  Because I’d been to advanced schooling, I was assigned as the Marine Corps’ representative.  The joker is that I had Marine Corps HQ looking over my shoulder.

“The thing got bent around so that they decided to divide people by intelligence, based on their score on a test.  Navy said, ‘We have all the ships, we should have all of the brightest people.’  Air Force said the same thing.  Army said, ‘Bullshit!’  That’s what pulled the thing apart; they couldn’t agree.

“I convened a meeting with one representative of each force.  The Army guy was completely out of his depth.  Rubens [offering a proposal that was a ringer] asked, ‘Can we agree to this?’ If we agreed to the principles to take all the bright guys and give them to Navy or Army, what would the consequences be?  It was apparent this was a trap.  I said, ‘I’d like to say a few words.  Recognize that if we agree to this, we have agreed to everything else.’  All realized they needed to confer.  Rubens offered me a job!”

Postscript: According to the United States Army War College Strategic Studies Institute, the National Security Act of 1947 resulted in coordination of the services without merging them. And discussion continues. Deliberations about implementation of the 1986 Department of Defense Reorganization Act “demonstrated that the services are still distinct and independent, despite certain movement toward unified operations and joint organizations.” The Strategic Studies Institute website page notes: “…the [Department of Defense] must ensure that the services are not so reduced in stature and influence that they lose their motivations and abilities to compete for scarce defense resources and accomplish their other national security roles and functions.”

Dad told me, “You can see why I hated to leave the Marine Corps.  I had an absolute ball.”

Semper fi, Dad. You did your part.

Filed under Family history, Marines and those who serve