(Second in a historical series for a family legacy book. Again, I will refer to Mom as Eileen in these years before she was Mom.)

When Eileen and Hank married, just 19 days after Pearl Harbor, the Marines were on full war footing. They found a minister who would marry them at the Post Chapel in Quantico on Dec. 26. No church wedding, no fancy dress, no friends in attendance – just Eileen’s mother and a couple of witnesses. Hank had a full 12 hours leave for his honeymoon. 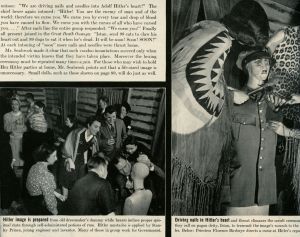 It’s hard to imagine the rapid changes that the couple confronted in 1941. A February 1941 copy of Life, the all-photographic news magazine that dominated the weekly news market, was still taking a light hearted tone with headlines like, “Bombed London Railway is Remade as Good as New in Four Hours.” An article explaining the aiming of field artillery boasted, “The gun crew works like a football team.” The rest if the issue was devoted to the belles of President Roosevelt’s birthday balls to raise money to fight “infantile paralysis” (polio), vacationing in Biscayne Bay, and “the blondest of the new crop of New York debbies” (debutantes). In the story, “Life Goes to a Hex Party,” amateur sorcerers in Washington try black magic against Hitler.”

Even though the U.S. was not yet in the war, the seriousness of the situation was already personal to Eileen. Her cousin, John Driscoll, to whom she was very close, was killed in a training accident when his plane collapsed on September 26, 1941, a week before he was to have received his commission in the Air Corps of the Army. Having already lost her father that February, Eileen would have grown up fast.

Then Pearl Harbor was attacked on December 7. The war was no longer “over there.” It was here. Henry later noted that the Marines fully expected at attack up the Potomac River, aimed at the nation’s capital. Immediately, a nation-wide blackout went into effect. Gas masks were distributed. Machine-gun posts were added alongside the White House and U.S. government buildings.

The two set up housekeeping together in married housing in Quantico, VA. In an interview with Betsy in 2000, Henry told her, “Because I was an expert shot, and also a good student, at the end of the ROC class I was selected to go back to Quantico as an instructor, which I did for two years. I went back to the same company I had been officer candidate in.”

Within two months, Eileen was pregnant, like many of the wives. Scott was born on November 13, 1942. With Hank working hard, she and other new mothers supported one another, and likely played occasional hands of bridge while swapping tips about baby care.

Henry was promoted from second lieutenant to first lieutenant during that first year, and wrote his brother, Ed, that he expected to remain in Quantico with the newly formed G Company until the early part of 1943.

So though Eileen would have known Hank would come safely home each night, at least for a time, they knew many others were in harm’s way. Hank explained later, “The first two years of the war were very tough on my classmates; they were expendable. The casualty rate among second lieutenants was high.”

Within months of Pearl Harbor, the Japanese Imperial Army invaded Wake Island and thousands of American forces surrendered in what would become the Bataan Death March. Corregidor was overrun and the Philippines were surrendered. Things finally turned in November 1942 after a victory at Midway and hard fought land and sea battles for Guadalcanal, which became Japan’s most staggering military defeat. Late in 1943, U.S. military forces deployed new amphibious warfare techniques that aimed to obliterate Japanese defenses. Even with the new strategy a success, U.S. Marine losses were heavy at Tarawa, a small atoll. On the first day of the attack, casualties were 20%. It took 18,000 Marines three days to secure the small island at a cost of 1,300 dead. Hank lost a close friend.

Hank shipped out in the third year of the war for the Pacific with the 23rd Marines, 4th Marine Division. He would have sailed out of Honolulu as part of the “Big Blue Fleet” on January 22, 1944, bound (although he didn’t know it yet) for the Marshall islands where he would join the attack on Roi-Namur.

Henry left with a memento that Eileen’s friend helped her to create: a pin-up style snapshot of her immersed in a bubble bath. The wives conspired to create the images as a way of reminding their men what awaited them at home.

At some point, Eileen went West to stay with Hank’s family in Yakima.

In those years before the 24-hour news cycle, Eileen would have anxiously awaited news reports of actions, which were often delayed for security reasons. Or she might have seen news reels with thrilling images of victories and frightening scenes of destruction. She wouldn’t have known where Hank was until well after the fact, when V-mail arrived. Very likely she would have breathed a sigh of relief after learning he was safe following the victory at Saipan.

The Admiral Campbell home in Yakima settled in to a rhythm, with Scotty enchanting Grandmother Campbell and Aunt Janie. Upon meeting Eileen, Grandfather Campbell was reported to have said, “Son, a pretty face will fade away, but a good pair of legs is a joy forever.” Grandfather Campbell, who ran away from a hard-scrabble Kentucky home at the age of 14, had an eye for such things. He maintained an extra-marital relationship with Erma and retired to her home after dinner to play cards on most evenings; Mom was invited to play bridge with the pair and Grandfather’s friends.

As a mother of a young child, Eileen would have supported the war effort by caring for Scotty. More than two million women worked in war industries and another million as “government girls” in offices, while others plugged the hole in manpower by driving trucks and manufacturing in factories. Everyone pitched in, however, by adhering to wartime rationing, planting victory gardens and salvaging scrap metal, rubber, cooking fat and nylon and silk stockings which were needed for war supplies.

An article saved by Eileen explained how to fill out the consumer application required to obtain Ration Book Number Two.  The application was distributed via newspapers “in recognition of the fact that newspapers reach practically every individual in the United States.” To complete the form, you had to go to your pantry on Feb. 21, 1943 and count all cans, jars and bottles containing 8 ounces or more of store-bought food: canned fruits, vegetables, soups, etc. Coffee (and sugar) rationing had begun in 1942 and all citizens were required to inventory the coffee on their shelves on Nov. 28 of that year. You then calculated the amount of coffee to which you were entitled by stating the pounds of coffee you inventoried in November minus 1 pound for each person 14 or older in the household. Then you counted the units of cans on your shelves and subtracted five cans for every person in the house. Based on the answers provided, you would be issued Ration Book No. 2. If you had coffee or canned food above your allotment on hand, those stamps would be removed from your book. You couldn’t buy items at the grocery books without the appropriate ration stamps.

Saipan grabbed the U.S. imagination not only for its size and violence – it took 71,000 U.S. troops six weeks, over 3,000 losses and another 10,000 wounded – but for the horror of the mass suicide of roughly 1,000 Japanese women and children who lived on the island. Emperor Hirohito had declared that civilians who died there, rather than surrendering, would have equal spiritual status in the afterlife as soldiers.

Hank went on to Tinian, and then Iwo Jima. By February 15, 1945, a quarter of a million troops were ready to attack the island’s 20,000 Japanese Imperial Army troops, who were well defended by a warren of interlinking caves and tunnels. Iwo Jima’s casualty rate – with 24,000 wounded and 7,000 dead – was the highest in the history of the Marines.

In late March or early April of 1945, Eileen would have gotten word that Hank was safe after the 23rd was pulled back to Maui for R&R, and to reconstitue its ranks after so many were lost.

The atomic bomb was dropped on Hiroshima in August 1945, and on August 15, WWII was finally over with the surrender of Japan to the Allies.

Between Tinian and Iwo Jima, Hank wrote to Eileen about the effect of the war on who they were as a couple: “I expect we’ve both changed this year—-yet I think we’ll be surprised at the smallness of the change. The part of me that’s fought the war out here—-is NOT the part of me that is the half of ‘us.’—-I feel strongly that it is the mechanical person out here fighting, and that the real person—-the one YOU know—-is in a state of suspended animation.—-Perhaps an accurate explanation of the fact that I never write what I’m thinking about and feeling—-that I neither feel nor think—-and it is as if there is a hard shell around me and that ALL of this present life went on outside me.”

By November, 1945, Hank landed in Southern California where he was reunited with Eileen, Scott, Eileen’s mother, and Hank’s Aunt Janie.

Hank later said he had to fight for his pants at first, with Eileen so competently in charge at home. He and Eileen drove to Washington D.C. with Eileen’s mother and Scotty to find a place to live when Henry began his new assignment at Marine Corps HQ in its Plans and Policies Division.

Next: the post-war years

One response to “My Mother’s War”