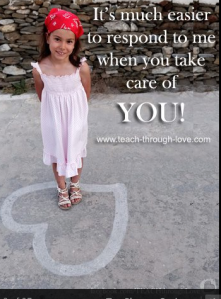 Can you imagine this image as an older parent? It’s not how we think about our role as caregivers, is it? (courtesy Teach Through Love)

Our first instinct as parents is to surround our children in a cocoon of love that cushions them against hurts both physical and emotional. But eventually, we find out that we do our children no favors if we never let them struggle.

I am learning that being a caregiver for an aging parent is not that different.

Since I moved my father to California in 2006, he’s spent the majority of the time at my house. He has his own bedroom with a cushy La-Z-Boy, television and bathroom. After giving up the family house where he lived from 1969 to 2003, I wanted him to feel this was home. At the same time, I wanted to know I could leave town and trust that he would be secure, with all of the support services he needs. So he’s had a one bedroom apartment in a nice assisted living community.

The back-and-forth worked just fine until July, when his health became unstable. Although he is now almost fully recovered, his emotional health continues to suffer.

My mother, during the final stages of lung cancer, expressed fear of dying, despite the deep faith that sustained her for so many years. My father wondered why, if there is a God, would he abandon my mother in her hour of need? Now it is my father who fears dying – and, in particular, dying alone.

Ten days ago, he asked me, “Can I come live with you?” He continued, “Living alone is no way to live. I’m afraid to die alone.”

Using my strategic planning skills, it seemed to me that we had to revisit Dad’s living situation. My objective, and that of my brothers, is to ensure that Dad lives with as little physical and emotional distress as possible. To that I had to add an objective about meeting the needs of my own family — oh, and taking care of myself, too.

It seemed to me that there were three possible solutions: 1) Dad would come to live with me full-time; 2) we continue to muddle through with more companion services at his apartment on the days that I am not available; or 3) we limit the number of nights that Dad stays at my house because of his increased distress when he has to return to his apartment.

I sought input from a social worker, a mentor, our home church pastor, his doctor, and a psychologist. Along the way I also had Dad evaluated for hospice and found out that he’s not close to qualifying for that type of end-of-life care. I had to start thinking about what would be best for a period of gradual decline that could last for several years – something I never imagined given that Dad has had three heart attacks, three strokes and three open heart bypass surgeries.

I also had to “listen” to myself. I realized I felt overwhelmed by the possibility of Dad moving in full-time. I really want that to happen, but now isn’t the right time. My Dad isn’t the only one who needs me right now.  I had to admit to myself that I felt exhausted.

The social worker shared a little tough love with me. She said, “He is distressed about the prospect of going back to his apartment because it isn’t ‘home.’ And it isn’t home because you won’t let it be home. He spends enough time at your house that the transition is difficult. He doesn’t remember exactly what happens there and it feels unsafe to him to return.” She went on, “As family members, you’re responsible for providing the caring, but not necessarily the care.”

This is very hard to do: separate what is in his best interest and his care needs from your heart duty as a loving daughter.  Like most elders in his situation, he is becoming more child like — likes what he likes and won’t budge; wants his mommy really to take care of him although he would not recognize that is what he is doing to you.  If he does move in and a caregiver is part of the team, you will have to force him to agree to let that caregiver do his/her thing.  You almost have to write out a ‘contract’ that he has to agree to.  Obviously it is not a legal thing, but you use it to force him to focus on reality when he just wants it all to be different and for you to be there constantly.

My church home pastor suggested that I facilitate a casual visit with a priest. “Throw him a lifeline,” he suggested. “He may choose not to talk about his concerns about death, but he may be ready to talk.” And my psychologist friend suggested having Dad evaluated for anti-depressants. His doctor agrees that may be worth trying.

So what was decided? I had a conference call with my brothers last Wednesday night and we decided to try out an arrangement where Dad is limited to three nights a week at my house. I’ve visited him at his apartment every day and joined him for lunch to reinforce the message that the staff knows him and is paying attention.

He doesn’t love it, but he is responding to the message that there are some things I need to do right now to take care of my family and myself. He asks how he can help, and I say, “Just be patient, Dad, and be supportive when I can’t be here.”

Week one went well, but the big test will come this weekend when I leave town for three days… Stay tuned.

One response to “Too much love?”