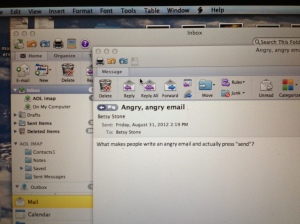 I was quite smug last night when I told a friend that I thought my brothers and I were really communicating effectively with one another. She had just returned from 10 days of overseeing her mother’s recovery from pneumonia and surgery, during which she was repeatedly second-guessed by her out-of-state sister.

Then I got an email from one of my brothers today, who reacted to an email sent by another brother. I won’t get into the details but I’ll share the zinger with which he ended his message: “…have the two younger sib’s simply cut out the two older sib’s from having a voice?”

I thought we were past this.

But the truth is that it is very, very hard for people who act like grownups in most situations to behave that way when something triggers half-buried resentment. We are all suddenly six.

There are a lot of “perhapses” that come into my mind. Perhaps the brother who sent the original email should have called instead of sending this particular message by email. Perhaps the brother who seethed over the email should have picked up the phone and expressed his concern to the sender, or to me (since I was supposedly colluding in the decision in question). We could have done better.

When we are stressed, as we are in no small part by Dad’s deteriorating health, we are reduced to the ugliest side of our personalities and temperaments.

It’s hard to keep one’s eye on the real issues here: how to make sure that Dad feels loved and safe, and how to preserve and perhaps strengthen our sibling relationships for the time when Dad is no longer there to bind us.