30 Years of Opposites, Happily Ever After 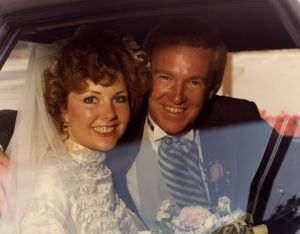 Today, my husband and I celebrate 30 years of marriage. You know that old saw, “And they said it wouldn’t last”? The Episcopal priest who married us, who’d known me since I was nine, actually expressed his reluctance to read the banns because we were too different. He based this opinion on the results of a psychometric questionnaire that he had both of us complete.

He was right that we were different, and we still are.

I could go on, but you get the idea. It’s not a marriage made in heaven – I see Fr. Dave’s point – but it wasn’t made in hell, either.

Those mid-kid years were tough, so tough that we ended up doing three years of marriage counseling. Where we learned – guess what? – how different we are. We were there because we had grown distant, because we had become great business partners, but weren’t such great lovers. Something had to change.

But the miraculous thing is that things did change. We reassessed, listened, got over our anger, and regrouped. We found better ways of being together that worked for both of us and honored our differences.

The result? I admire my husband’s integrity, his stability, and his rock-solid values, which include commitment to me. He laughs and cries more freely than I do, and both his humor and his empathy have helped me to be a happier, healthier person. Though we have been very angry with each other on occasion, he has never treated me poorly or tried to wound me. I know a lot more about music than I would have, although I am still hard pressed to “name that band,” or remember lyrics. Our kids, now young adults, are better people for having had parents who learned to listen to them and each other through our differences; they could not be more forthright, and they actually continue to seek our counsel. And our house is both neat and clean. Call ours reconcilable differences.

While this particular post honors the differences that have challenged us through the years, we had a lot of commonalities that provided a foundation. Belief in God (shaky at times, but nonetheless there), priority on family, empathy and respect for one another. And love.

It’s 30 years later, and we’re 55. I feel like we’re in phase three of our marriage, and I look forward to the phases to come. I enjoy being with him more than I did 10 years ago, and as much as I did 30 years ago. Having said that, I don’t feel at all like I did in my mid 20s. I’m not the same person. Neither is he. But we’ve found a way to be together.

5 responses to “30 Years of Opposites, Happily Ever After”