What D-Day means to my Dad 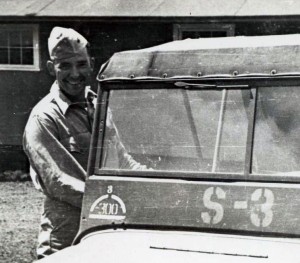 Two weeks after my father’s recent (and, thankfully, small) stroke, we were in his internist’s office for a follow-up visit.  It was June 6, D-Day.  Dr. F. asked him, “So where were you on D-Day?”

I knew what was going through my Dad’s mind.  Which D-Day?  D-Day for my Dad was February 19, 1945, the invasion of Iwo Jima.  For most Americans, D-Day is Normandy, Saving Private Ryan, Band of Brothers.

Until Dad was in his early 80s, about the time my Mom died, he never talked about the war.  When he did begin to describe it, interrupted by long buried tears, he often began by describing the long, narrow beach at Iwo Jima where anti-aircraft guns rained fire from their unobstructed vantage points above.  I wrote notes as we sat on the couch in my parents’ home in Tacoma:

When we pulled in offshore, the light was growing.  You’re up on the deck and you see this ungodly, ghostly tower rising 600 to 700 feet in the air.  It was a volcanic spire — the goddamnedest thing I ever saw.  Scary.

On the night of D+2, he described sitting in a Japanese pillbox that had become the 23rd Marines first command post:

There was a tremendous concussion over my head. Sand came raining down.  I think a round bounced off (the pillbox).  The next night, the Japanese fired 240 mm mortars, as big as a trash can.  You’d see it go up, but you wouldn’t know where it would come down.  They dropped one about 30 yards outside the pillbox.  Afterwards there was just a crater where 15 or 16 people had been standing.  Just like that, they were gone.

The American victory at Iwo Jima was a crushing blow to the Empire of Japan.  Despite the superior numbers of the American forces — roughly 70,000 battle-hardened Marines to 22,000 Japanese — winning the island and its two strategically located airfields took more than seven weeks to win.  The topography of the island, and the preparation of the Japanese with thousands of bunkers, hidden artillery and a warren of underground tunnels, made it the Marine’s toughest challenge of the War of the Pacific.

What everyone remembers is the famous photo of the American colors being raised on Mt. Suribachi.  And Dr. F. asked about that, too.  Years ago, I asked Dad that same question:

What you saw in the picture was the second time they put up the flag.  One officer had a flag in his back pocket.  When they took the hill, they ran the flag up.  Later, they sent in a full-sized holiday flag.

As I listened to my Dad, I couldn’t imagine how he had the guts to face the enemy fire that they did on Iwo Jima.  At 28, he was just a few years older than my daughter is now.  I asked him how he did it.  Wasn’t he afraid to go ashore?  “You did it for the guy next to you,” he said.

Like many WWII vets, my Dad is always a little surprised when people thank him for his service or call him a hero.  He was twice decorated, the second time for his efforts as operations officer for the 23rd Regiment, 4th Marine Division, during the Iwo Jima campaign.  But when he thinks “heroes,” he thinks of moments like this:

The island was shaped like a pork chop – a volcanic mound with steep sides, honeycombed with caves. It overlooked the beaches we landed on — perfect visibility.  Down at the far end was another escarpment looking the other way.  We had one fine officer who took a posthumous award for scooping up men without leaders and taking the key point.  They got all shot up.

As for his own moments of fear, he tended to make light of them:

Some days later, maybe D+4, we were in reserve because we’d  lost about a third of our troops by then.  My job was to prepare to take over and I needed to know where everyone was, their weaponry, etc.  So I went down to Division HQ.  Enough of the island had been taken by then that you could move around.  I had to walk about one mile to the other end of the island.  The shooting had died off.  The map was surrounded by officers and I couldn’t see anything.  Then, the Japanese started firing high velocity rounds from their position on a cliff.  Division HQ staff bailed out and I took all of the information I needed and walked out.

But Monday, as we talked with my Dad’s physician, it saddened me to think that most people no longer see “the Colonel.”  They may see a 94 year old man with a number of chronic conditions and assume he is frail.  They may hear a gravelly voice and assume he’s crotchety.  They may take his hearing loss — “too many bombs,” he says — to mean that he is stupid when he cannot understand them. Or they may not see him at all, and just treat him as invisible.

When my father was being discharged from Sutter General two weeks ago, two staff members made the mistake of discussing Dad — three feet away — without involving him in the conversation.  He said:

I am not a defective person.  Why are you not addressing me?

He may not look like the Major that he was in 1945, much less the Colonel, but he still knows how to command.

For more first-hand reports from Marines who served at Iwo Jima, here’s a source I recently found when looking for news of Dad’s friend, Col. Shelton Scales.

6 responses to “What D-Day means to my Dad”