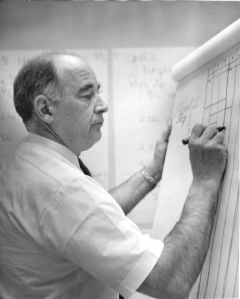 A few days ago, a brown Kleenex box triggered a flood of images – all of my father in his last year of life. He had shrunk by then so that we stood eye to eye, his broad shoulders rounded as if chipped away by a sculptor. All of his sharp edges were gone. Even his feet had lost their original conformation and spread like puddles (the same flat feet that nearly prevented his entry into the Reserve Officer’s Commissioning Corps but for an obstinate doctor who said he sure as hell was going to accept him).

As I wrote about the tissue box, I was thrown back forty years to a time when my father would never have carried tissues. He was a white handkerchief man.

Although my father was no longer on active duty, he still wore a uniform: neat pants, lightly starched white shirt, tie, belt and shoes (polished). Under protest, he capitulated to my mother’s demand, grew his hair longer and altered his grooming regimen in conformance to the “dry look.” Though a civilian, he remained prepared for inspection. Every Sunday, he assembled his gear to maintain his shoes: the brown terry cloth towel that would protect his trousers, the Kiwi shoe polish (brown and black), the mesh leg from a pair of pantyhose (successor to silk hosiery, back in the day), the long brush with natural bristles, and a bottle of Aqua Velva. Next to him, a row of sturdy Oxfords awaited at attention. In a process that seemed to take hours, he inspected a shoe, wiped off any dirt with a damp cloth, and applied a thin coat of shoe polish. Resting the shoe on his thigh, he buffed it to a sheen, rhythmically dashing the brush back and forth across the toe, along the side and around the heel. One-two, one-two, the same number of strokes each time. Then he paused to regard the result. Although any normal person would have stopped there, he was not done (he would say finished — he often corrected waiters who asked if he was “done” when they wanted to clear his plate). The process was not complete until the shoe had been dabbed with after-shave tonic to set the polish, and then buffed with nylon, see-sawing back and forth until the shoe was so shiny it reflected. Periodically my father would notice the sorry state of my shoes and suggest I polish them. What a waste of time, I thought.

My father looked out of place in the 70s. When he grew his hair longer to match the style, it flared out from his head in waves below his bald pate. I look like Guy Kibbee, he said, referring to the old actor known to play jovial buffoons. Shearing his hair in the style he preferred would expose him as the former Marine he was, an identity my mother was sure would limit his advancement, when protests against the Vietnam were at a crescendo.

My mother and I each had a part in maintaining my father’s standards of appearance. (The “boys,” my brothers, performed masculine chores like mowing the lawn.) My mother laundered Dad’s prodigious supply of white V-necked undershirts, white boxers and wool socks, ironed his shirts (permanent press though they were) and dropped and retrieved his light-weight wool trousers from the dry cleaner’s. But ironing my father’s handkerchiefs was my responsibility. One of few. I was hardly overburdened with chores like my best friend who seemed to be grounded every other week for failing to load or unload the dishwasher when it was her turn.

I am standing by the ironing board in the laundry room, setting the hot appliance on its heel while I lay a damp hankie across its surface. In this small utility room off the kitchen, crowded with the extra refrigerator at one end and the washing machine on the side opposite the wooden ironing board, I can barely turn around without collapsing the flimsy drying rack behind me. On the washing machine is the roll of handkerchiefs that I sprinkled with water the night before and then rolled in towel. It was the third time I’d prepared them for ironing — and then didn’t do it. My mother hollered at me, angry that my father was out of stock and exasperated that the hankies had been abandoned once again (they will get moldy, dammit).

I look out the laundry room window, half noticing the white spring sun as it lights on the hummingbird feeder sparkling with cherry-colored liquid. I’d rather bike over to my friend Ellen’s. Or go downstairs, where I get left alone. I’d rather be doing anything but ironing or be anywhere but home. In my reverie, I almost scorch the hankie.

Those were tough financial times for my family. So tough that my father convened a series of family meetings run according to Management By Objectives (complete with flip chart), a technique he used in his work as a human resources director. We play our roles according to type: Dad the planner, laying out the problem and situation; Mom the annoyed, noting that she had more house to manage than ever before, with less help; Bruce the eager, brimming with ideas about how he could help; and Dean the loyal, committing to find part-time work at a gas station (and doing so, within a week). Me the self-absorbed teenager. I did not see how I could possibly help, given how busy I was with homework and activities. I also contributed to the meeting evaluation by complaining that a family should not be run like a business. Duly noted by my mother in the typewritten minutes.

I finish my chore. I have ironed each square flat, folded it in half, then in halves and halves again. My father will fold it one more time when he places it in his pocket. I probably gave it to him. I never know what to get him, the man whose only interests are hunting and fishing. He knows exactly what he wants – another rod, another shotgun – or needs – another pair of Filson tin cloth pants, wool socks. Nothing in my budget, anyway, and nothing I’m interested in. So he gets handkerchiefs. I know he will open the gift ceremoniously, slicing the ribbon with his pocketknife (ever at the ready) and displaying the contents of the box with a flourish. (Handkerchiefs! Great, just what I needed, Betz!) I think, he is the most predictable human being ever.

I never predicted that he would become old, so old that we would stand eye to eye, so old that he would rely on Kleenex, wouldn’t even remember that he was once a handkerchief man. I feel ashamed by my teenage annoyance, my flickering embarrassment about my father, my glowering thoughts that I hid behind thickly mascaraed eyelashes. I remember the days when I still looked up at him, and he was a handkerchief man.

3 responses to “A Handkerchief Man”