“LOVE” and “NO UNFINISHED BUSINESS” 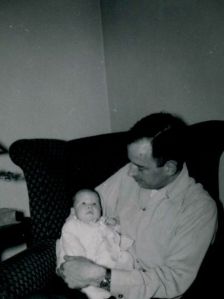 Today is the day after the day after Dad died. And it feels like a week ago. I slept, really slept, in a spare bedroom at my in-laws, a half mile away. I slept without listening for trouble in the night, and without awakening to catalogue the things that grow disproportionately in importance in my unconscious brain.

Everywhere I went today, the people in my life who had come to know my Dad cried when I told them he had died. Our family internist, Dr. Flaningam, called after work hours to extend his condolences and his compliments for the quality of life we helped Dad to achieve in the seven years since he moved to California.

We removed the medical equipment that helped keep Dad comfortable. As helpful as these things were — the commode, the hospital bed, the oxygen compressor, the nasal cannula, the air bed — I hated them. They represent the rudeness of old age and the torture of dying. I banished them to the garage and tossed out the bedding that served my Dad on his last day. I am still shaking my fist at death for taking Dad even though I know he wanted to be released and I wanted that for him.

Knowing that they were leaving tomorrow, my brothers began to sort through Dad’s things — his hats, gloves, socks, shirts, fishing gear, knives.  I know it made sense for them to choose things they would like now while they are together; Dad, if anything, was pragmatic. He had “good gear” and he would want to see it used. Irrationally, I just wasn’t quite ready for the divvying.

During the day, we reviewed a draft press release that I wrote describing Dad’s accomplishments in the Marine Corps. We picked over this detail and that, but in the end came up with an accurate history that we all could agree to. After we approved it, I sent it to a few newspaper editors.

As dinner approached, I was feeling pretty low. For the first time, I faced across the dinner table and Dad wasn’t there. Bruce and Dean were in his customary spot, the “defensible position” on the far side of the table. I started to cry.

Over dinner, we talked about Dad. The news release focused on the accomplishments that news media might find noteworthy, but what did we really think was the story of Dad’s life?

Bruce said that he felt he got to know Dad better after Mom passed away. “He became my hero,” Bruce said, not only for what he did in the war but for the extremely difficult things that happened to him. “I got to know who he was,” he said.

As we talked more, we concurred that Dad became more loving, gentle and non-judgmental as he aged. Scott said, “When I did something stupid, Dad would let you talk and help you lay out your alternatives. He’d let you pick your course of action, but once you did, he’d back you up.”

We all acknowledged that Dad changed after leaving the Marine Corps. As Dean put it, “Dad was incredibly career focused. He was so focused on achieving the next milestone that he didn’t have time to smell the roses… Once Dad set aside his ambitions, he reassessed what was important.”

We haven’t written his obituary yet, but we are going to try to write about who he is, not what he did. I capitalized and underlined these two phrases:

2 responses to ““LOVE” and “NO UNFINISHED BUSINESS””